I've finally got around to finishing off my first attempt at a Vacuum Formed Building. My Middle East House with compound walls.
It's early days yet and I'm learning all the time. On the back of this first moulding I've modified the master and will try some more when Colette lets me buy more plastic sheet (i.e. Pay Day!) 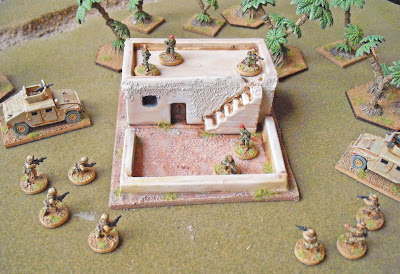 On the original mould I used sand covered cardboard sheet for the compound base. Naively this came from a takeaway lid which was wax coated! So guess what, the sand fell off! 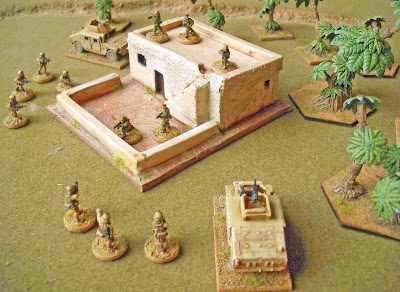 Now I've replaced that with 3mm mdf. This should also give the compound a little more rigidity when moulded. You will note from the pictures that I have mounted my prototype moulding on 3mm mdf to give it a bit of weight and ensure it lies flat on the table. A sheet of 3mm mdf 60mm x 1200mm was only £6.70 from Wickes....enough for a lot of bases! 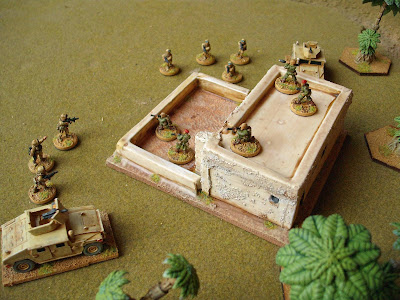 As Colette pointed out, I could probably have created this model in just two parts (rather than 7) - simply the building + the compound base. This is indeed true, but what I was trying to achieve was the start of a series of mouldings that provide a selection of modular parts that allow a number of different buildings to be assembled. 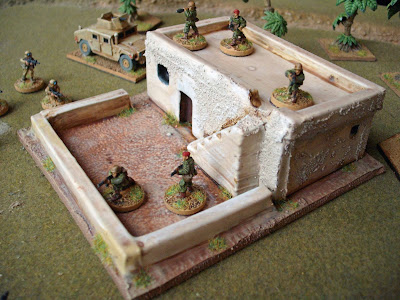 Another mould will contain parts to create an upper storey with a balcony and (if there's room) a dome to create a mosque. I'd also like to make a set of separate compound walling to allow you to make the extensive compounds seen in Afghanistan. 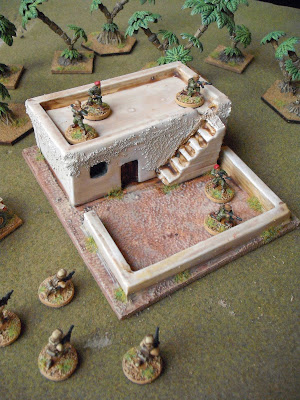 But before all that my next master is nearly finished - A selection of modular streams/tracks - 6 pieces, stream/track 15mm wide and (in all) just over 1metre in length. These could be used as rivers in 6/10mm and streams in any other scale up to 28mm. Depending on how they are painted they could just as easily be tracks as streams! Keep checking back on the Blog - these should be ready by early November.
Posted by TimsTanks at 09:53

Email ThisBlogThis!Share to TwitterShare to FacebookShare to Pinterest
Labels: Terrain